The Robert W Coleman Elementary School is becoming a model of using mindfulness and yoga instead of suspensions and detention.  The Mindful Moment Room, where deep breathing and clearing the mind takes place.  It is where new learning happens such as understanding emotions, and how to react and deal with them. The entire school has two 15-minute periods of Quiet Time using Transcendental Meditation. 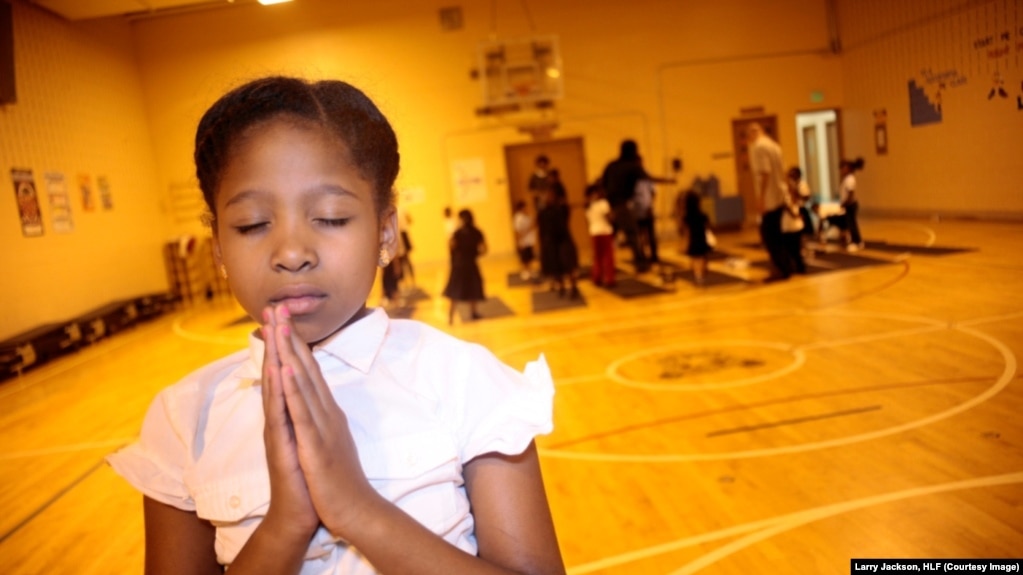 A student takes part in the Holistic Me After School Program in Baltimore, Maryland.

Along with subjects like reading and mathematics, school children at the Robert W. Coleman Elementary School are learning how to spend time in quiet thought.

The students are learning yoga exercises and meditation skills. The aim is to provide them with better tools to deal with the daily struggles they face.

The school, called Coleman for short, is in the American city of Baltimore, Maryland.

Principal Carlillian Thompson brought the program to Coleman in 2010. She sends some of her most troublesome students to the Mindful Moment Room instead of requiring them to stay after school in detention.

Nearly one fourth of Baltimore’s population lives below the poverty line. That information comes from the United States Census Bureau.

Many children at Coleman face conditions common to poverty.

Principal Thompson told broadcaster CNN that a few of her students are homeless, while others live in homes with no electricity. Some have little or no food to eat. Others are related to victims of gun violence.

The Mindful Moment Room is a place where Coleman students do deep breathing exercises and clear their minds. They come to learn how they can better react to situations, and how to calm themselves. They can also speak with Mindful Moment specialists about what caused their teachers to send them there. 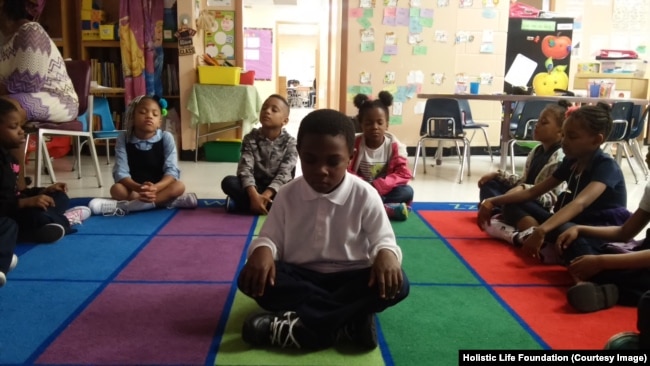 Atman Smith is one of the founders of the Holistic Life Foundation (HLF), the organization that leads the program. He told VOA News a few years ago that meditation and yoga can help young people deal with life's difficulties.

"It's…like…a serious cycle in most inner cities where people don't know how to resolve conflicts peacefully. That's why there is so much violence and abuse and, in us teaching these kids meditation – giving them these tools to self-regulate – it’s going to change, I guess, the social construct and the way the inner city works and is thought of.”

HLF serves 4,500 students each week, and works with a total of 14 Baltimore schools.

Coleman is not the only American school adding meditation and yoga to its academic curriculum. Schools in other cities are also using these tools.

In 2007, Visitacion Valley Middle School began offering meditation, NBC News reported. The school is in one of the poorest areas in the city of San Francisco. Some children there witnessed stressful events in their neighborhoods.

A large number of the students see people carrying guns on a daily basis, athletic director Barry Driscoll told NBC News. A few years ago, there were three to five fights at the school every week.

But then, the San Francisco School District partnered with a local organization called the Center for Wellness and Achievement in Education. The center brought a meditation program called Quiet Time to Visitacion Valley and three other schools.

Each day, during Quiet Time, the whole school has two 15-minute periods of Transcendental Meditation (TM). TM is a process for slowing down unwanted thoughts and reaching a state of calm awareness.

At first, O’Driscoll thought meditation was foolish. But, as he told NBC, over four years of having Quiet Time, suspensions at Visitacion Valley have fallen by 79 percent. Over that period, attendance has risen to 98 percent.

A nearby school that uses the program has also seen a big drop in suspensions -- 75 percent, NBC noted. In addition, students are performing better academically. 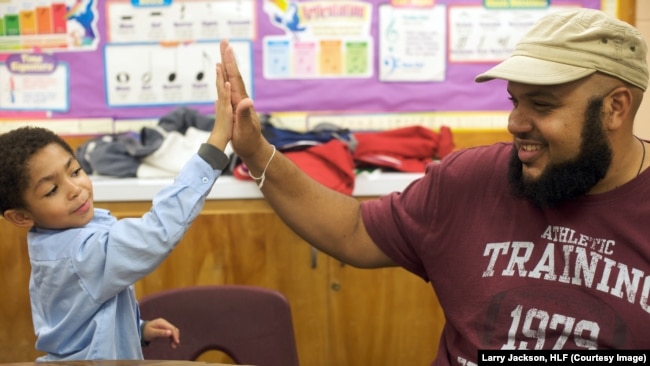 Holistic Life Foundation co-founder Ali Smith (brother of Atman Smith) gives a “high five” to a student in the Holistic Me After School Program.

Principal Thompson also believes that meditation is responsible for the drop in suspensions at her school. Over the past year, there were no suspensions at Coleman, compared to four suspensions during the 2013-14 school year, CNN reported. And, students are almost never sent to her office for bad behavior anymore, Thompson noted.

For the past half century, meditation and other stress-reduction activities have been studied as possible treatments for anxiety and depression.

A 2014 study links mindfulness meditation to reduced pain, depression, and anxiety. That study was published in one of the American Medical Association’s many publications, called JAMA Internal Medicine.

As for students, there is some scientific evidence that yoga and meditation can help people, but more is needed.

But a 2012 study on yoga found that it improved middle-school students’ ability to deal with anger and stress. The Journal of Behavioral Science reported the findings.

However, education expert Patricia Jennings told the New York Times that these practices don’t “address poverty, and it may not work for everybody.” Jennings is a professor in the school of education at the University of Virginia.

Some parents are not happy about schools offering yoga programs. They think yoga has a religious meaning because of its roots in Hinduism and Buddhism.

For example, US News and World Report magazine reported on a Georgia school that received protests from parents. The school has made changes: it still offers breathing and stretching exercises, but has removed the Hindi term “Namaste,” for example. The school principal also wrote an apology to parents.

In a special report for CNN, yoga trainer Dana Santas explained that some parents don’t realize American-style yoga is non-religious. She said it is an exercise focused on a person’s mental and physical health, not spirituality.

As Principal Thompson told VOA, for a group of fifth-grade boys at Coleman, meditation has made a huge difference.

"But I could see, over time, that they learned how to, instead of using their fists, to resolve different situations, that they started with the breathing techniques. They began to talk about their problems, instead of reacting like they used to."

Former students from programs offered by the Holistic Life Foundation are now 50 percent of the organization’s workers, Newsweek reported.

Alice Bryant adapted this story from a VOA news report by Selah Hennessy and reports by other news sources.

Do you know about schools that use meditation and yoga? What kind of effects have you seen from it? We want to hear from you. Write to us in the Comments Section.

Words in This Story

yoga – n. a system of exercises for mental and physical health

poverty line – n. an income level below which one is considered to be living in poverty

regulate – n. to set or adjust the amount, degree, or rate of something

curriculum – n. the courses that are taught by a school or college

stressful – adj. making you feel worried or anxious; full of or causing stress

address – v. to give attention to something; to deal with a matter, issue or problem

academic – adj. of or related to a school, especially a school of higher education

awareness – n. in meditation, awareness is a process of actively paying attention to one’s mental, physical and emotional experiences